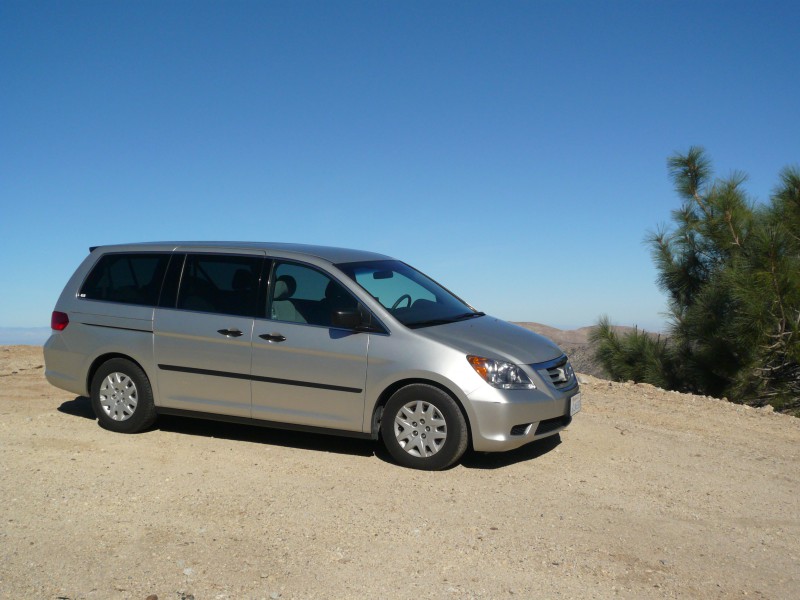 The first Honda Odyssey, sold in Europe as well as the USA, was little more than a medium sized estate car with extra seating. The second generation model, no longer sold in Europe grew to the proportions of a full-sized MiniVan, and this was continued in the current model, which has been on sale for a couple of years. The latest Odyssey, with seating for 7 or 8 adults and a good amount of luggage comes with a 3.5 litre V6 engine, and measures a wopping 201 inches from front to back. Along with the Toyota Sienna, another ‘Van built specially for the US market, it’s generally been voted by the motoring press as “best in class”. Having spent a day with another rival, the Chevrolet Uplander, widely castigated as now worst in class, it was an ideal opportunity to test out the Odyssey.

That 3.5 litre engine develops 244bhp, at an un-MiniVan like 6250 rpm. It’s enough to endow the Odyssey with a perfectly acceptable turn of speed, but with all that bodywork to propel, it is clear that this is not going to be the proverbial ball of fire. I was surprised to read that the press had timed the 0- 60 at about 8.5 seconds, as it does not feel that fast. The engine is just what you’d expect from a Honda, though, in that it is turbine smooth and pulls well from any speed to any other, but it does so with none of the pizzazz that you might expect in a Civic or a sporting version of Honda’s other vehicles. The gearshift is controlled from a stubby selector mounted on the dash. I found it surprisingly difficult to engage the gear that I intended, sometimes ending up in neutral or second rather than drive, as the distance between the positions is small, and the only way of telling which you have selected, for sure, is to look at the indicator on the dash. Whereas the outright performance of the Odyssey was no better than the Uplander, the handling definitely was. In that car, body roll and understeer were all to evident, whereas in the Honda, which I tested on the same roads, the car felt that more composed. There was an added test, when I decided to give chase to a taped up prototype vehicle on the Angeles Crest Highway. The uphill gradients and swooping bends of that road were no issue for the Odyssey, and I was able to catch the mystery car, much to the test driver’s chagrin, no doubt. Steering feel was OK, and the overall weighting was appropriate. The brakes survived the challenges of the mountain roads without any cause for concern. The Odyssey rides well, offering a smooth passage over some of the less well surfaced roads of the Los Angeles area. The vehicle is quiet, too, with no significant sources of noise from engine, road or wind to intrude. It was not quite as thirsty as the Uplander, either. I averaged 22mpg on more or less exactly the same route as that one which I tested the Chevy.

MiniVans are all about practicality, and here the Odyssey does well. There are two separate seats up front. In between them is a large plastic tray which has 4 cup holders on it, and a stowage area. This device can be swung down to sit flush with one of the seats, to leave a large space through which one could just about walk. Behind the front seats are 2 further separate chairs. There is space between them for an additional seat, which is delivered in some trim packages, but not in the entry level LX model which I tested. These seats can be slid forward and backwards, and the backrest folded on the cushion, as well as being tipped forward, should more cargo space be required. Behind these is the rear-most row of seats. Split one third/two thirds, these are proper seats for three adults, with ample leg, kneed and head room. These can also be folded flat, and then, very ingeniously, the whole seat can be pulled over through 180 degrees, to lie flat in the well behind them, thus giving a flat luggage area. With the seats erect, there is a good sized luggage area, as it is very deep indeed. There is a small underfloor area where the feet of the second row of passengers would be, and there are plenty of cubby holes up front, for those additional items that families are large groups of people would want to take with them. It is clear that a lot of thought has gone into maximising the available space.

The dash comprises a cowled binnacle for the instruments, which are clearly marked, and very easy to read, along with a stereo system mounted high up in the centre of the dash, the gearlever, air con controls and then, going downwards, a series of cubby holes, more cupholders (there are 8 available to the front seat passengers), and power sockets. There is a drop down glove box, with a rather small auxilliary compartment above it. The parking brake is the usual American-style pedal which you push to set and push harder to release. The dash is finished in good quality plastics, with a thick strip of aluminium effect trim along the bottom to provide some colour contrast. Only one thing disappointed: the steering wheel. Unless you go to a top of the range model, where you get a leather covering, this version comes in a rather hard plastic finish and it is not particularly nice to hold. The seats, finished in the sort of velour trim that seems to have gone out of fashion for mid-range cars in Europe, were both comfortable, and nice to look at and sit on.

Reading this, it will be clear that there is not much wrong with the Odyssey. Assuming you are looking for this sort of vehicle, that is. US Consumer Guide give the Odyssey a rating of 91 (out of 100), which is among their very highest scores. The Uplander, by contrast gets 57, which is the lowest score for MiniVans, though not by much (the Chrysler Group ones are not that well rated). Is the Odyssey that much better? Probably not, but it certainly is better to drive, and likely to prove more reliable. Until I get to try the Sienna, this would be the MiniVan of choice in the US. Would it sell in Europe? I doubt it. It’s just too big, and the fuel consumption would be just too cripplingly expensive.