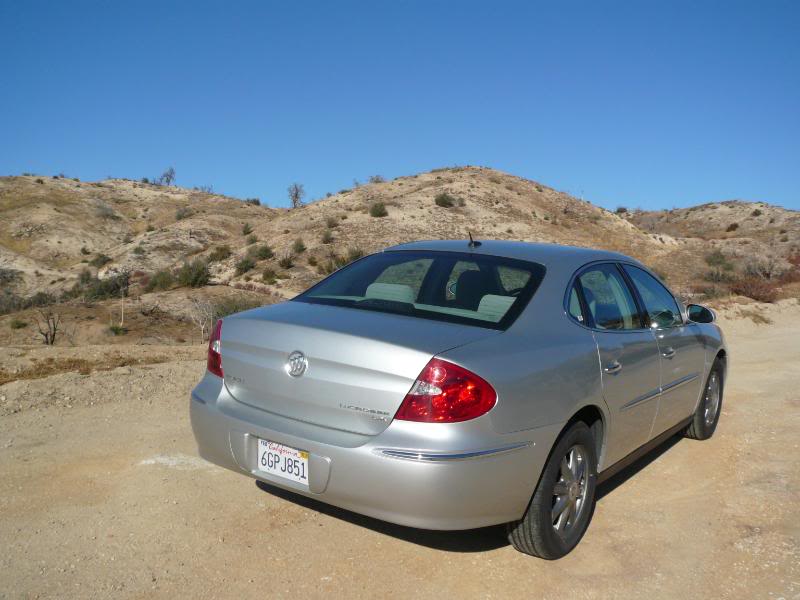 For many years, the stereotypical image of a Buick buyer has been that of the senior citizen. Whilst Cadillac was definitely at the top of the GM tree for luxury, Buick definitely came next in the hierarchy, leaving Pontiac and Chevrolet and Saturn (and Oldsmobile while the brand was still extant) to compete for the volume sales at lower prices. The Buick sedan, for years typified by the Century and LeSabre models were roomy cars, built in the traditional style, with slightly chintzy trim, soft suspension, lots of space and absolutely no fun appeal whatsoever. Some years ago, GM realised that this was probably not a sustainable strategy and tried to change the perceived image of both Cadillac and Buick. With the former, they seem to have succeeded, without totally alienating their traditional buyers, by keeping the DTS model in the range, whilst injecting some dynamism into the range with the CTS and STS cars and then offering the “V” models. Changing the brand values of Buick has proved more difficult, and a series of SUV and crossover models that appeared in the last few years have not really had the transformational effect that may have been intended. When the long running Century came up for replacement in 2004, Buick signalled an intent that things were changing, by coming up with a new name: LaCrosse.

Immediately, there were problems. The loudest complaints came from Canada, where a slightly bemused population wondered if GM knew what the word LaCrosse meant in Quebecois slang. Hastily, a new name was coined for the Canadian market, where the car has been sold as the Buick Allure. The press were less troubled, and the LaCrosse received quite a favourable reaction when the car went on sale in the 2005 calendar year. The car has achieved steady, but not spectacular sales ever since. When Hertz launched their “Green collection”, the LaCrosse was identified as one of the cars within that group, based on its relative fuel efficiency, compared to other models. In my testing, I averaged 22 mpg (US), which equates to 26.2 mpg Imperial. Not a terribly impressive figure, I have to say, especially considering that some of the test mileage was conducted at steady speed on the 405 freeway when I went down to Costa Mesa and back on a very wet and soggy day.

The LaCrosse has a 3.8 litre engine, which delivers 200 bhp. I think the best word to describe it is “adequate”. It certainly does not make the Buick a fast car, but for those who wanted more power, there was a 5.3 litre V8 version of the car, which developed 300 bhp. I suspect that few were sold, as the LaCrosse’s target market is not those who want a fast or sporting sedan. What it does offer, though is a very relaxed cruise. When I first started it up, I was treated to noise levels almost as low as you experience in a stationary Hybrid vehicle. Indeed, at low speeds, you really cannot hear the engine at all, and I would go as far as to say that this must be one of the quietest cars I have ever driven. At speed on the regular roads and freeways of California, there was just a slight engine noise evident, but it was only if you accelerated very hard that you were aware of any significant increase in the decibels. This did indeed make the car a very relaxed cruiser indeed, which is probably perfect for the target buyers. If a burst of speed or acceleration is called for, then the Buick does respond reasonably well to a prod from your right foot, so it is certainly not an embarrassment in traffic. Be in no doubt, though, that this is not a car that you would even dream of selecting if you wanted any sort of fun behind the wheel. The steering is light, but it is also pretty devoid of feel, and precise is not the word first word that comes to mind. Handling prowess is not exactly a LaCrosse forte, either. On the twisties, I would have to say that it really was quite hard work. There is plenty of understeer, and it rolls a certain amount on the corners. I took up into the mountains, and whilst if never alarmed me, it seemed more appropriate to enjoy a leisurely drive than a spirited one. It does ride quite well. The streets of California are very varied in quality, with some – such as the newly resurfaced Angeles Crest Highway – beautifully smooth, and no test of the ride characteristics of a car, and others come with ridges, gaps, bump, holes and veritable craters that, frankly, no car is ever going completely to disguise. The Buick did a decent job, and its soft suspension evidenced the fact that this was a higher priority for Buick’s engineers than making it fun to drive. The brakes required a fairly firm push to retard the car. Visibility was not brilliant, as the rear of the car is quite high, and the third side windows are very small, thus making for quite restricted over the shoulder and behind you vision.

The interior of the LaCrosse is pretty much what you might expect a traditional American sedan to look like. With one difference: it does use decent quality materials, that appear to have been selected so that all the pieces of trim actually match. The dash itself is moulded from soft touch plastics, that are of reasonable quality, though nothing to alarm the German manufacturers or even recent American Fords, and it is faced with a sizeable slab of “wood”, that is of course actually plastic. Not really to my taste, but it could look far worse. The same wood/plastic features on the doors. The instrument dials are clearly marked, and there are just a speedo, rev counter, fuel and temperature gauge, all easy to read, in a panel in front of the driver. There is a single column stalk, of the old-style GM type, where you have to twist the end through all the intermittent wiper settings to put the wipers on (a necessity given the re-enactment of Noah’s flood that happened on one day of the test), and there is a flap that you pull towards you to operate the washers. This is a very awkward feeling operation, but I believe this standard GM part that used to be pretty ubiquitous has thankfully been consigned to history on more recent models. The centre of the dash contains a row of push buttons which provide different trip computer displays, and below this are the stereo and climate control functions, both of which proved easy to use. The centre console – no sign of the bench seat that was in the LaCrosse’s predecessor, the Century – has the gear lever, a couple of cup holders and a commodious arm-rest with stowage area in it. The parking brake is a foot operated lever that sits very high and I found was actually quite a nuisance as it was more or less in the line where my left leg wanted to rest on the floor to the left of the brake.

More of a challenge were the seats. The cushion on the drivers seat was too long from front to back, meaning that I simply could not get comfortable. The seats themselves are soft and squashy – just as you might expect from a traditional Buick – so this challenge was not as bad as it could have been. Had that been the case, the car would have made an early return to Hertz to be swapped for something else. The rest of the seat design was not really that good, either, as the seats were rather shapeless and flat, so despite the available adjustments, I did not feel as comfortable as I would like. In the CX trim level, the seats are finished in a velour style cloth. The more costly CXL version has leather trim as standard. The column has two separate adjuster levers on it, so it would go in and out and up and down, so I could at least get the driving position that I wanted.

The LaCrosse is a large sedan, and would easily seat five adults. There is ample rear seat leg room and headroom did not seem to be an issue. There is a very large boot, too. Initially, I struggled to get access, though. The remote opening function on the key fob did not work (it turned out that it did not operate the door locks, either, so I am guessing that the battery had died), and as there is no external lock, the only way in is to hold the button on the driver’s door that operates the central locking up for long enough for it to release the boot remotely. What you then get is an area that is deep from front to back, and with plenty of height. I was surprised to find that the back of the end, ie the other side of the rear seats, appeared to be just a piece of sound deadening material. Not exactly a quality feeling item of finish! There is ample oddment space in he cabin with some very narrow door pockets, the moderate glove box, the centre arm-rest cubby and a lipped area in front of the gearlever.

With this model of the LaCrosse, I found a traditional Buick. To be honest, I was expecting something a little less like that, as I thought this model had been praised for representing an advance on the old Century that it replaced. If the stereotypical superannuated Buick buyer were to get one, he or she would probably be quite happy, as it is a competent enough sort of car. But if your aspiration was for anything other than a roomy car and serene cruiser, I think you would feel more than a little disappointed. A completely new car for the 2010 model year went on sale in the summer of 2009. It will be instructive to see just how far this moves on from the old style Buick experience that I had with this test car.