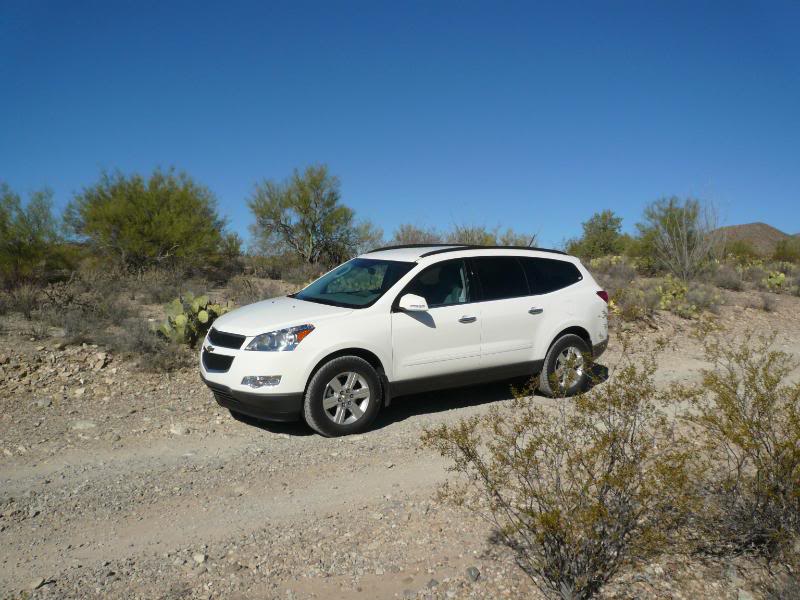 Badge engineering: the term applied to many cars in the 1950s and 1960s, when a round of mergers and acquisitions had seen once former rivals part of the same stable, and it was assumed that brand loyalty was so strong that it was necessary to offer what effectively were competing cars, by changing only the details of the grille, lights, trim and specification and maybe the engine choices. You only have to look at the products of the BMC Group in the UK, or all of what became the “Big Three” in America, to find copious examples. In the past twenty years or so, the practice has largely disappeared, as a new phrase entered the vocabulary: Platform Sharing. Taking advantage of more sophisticated design, test and manufacturing techniques, it was possible to share all the costly but largely invisible elements of a whole range of cars, and yet make them appear completely different. All the world’s major manufacturers indulge in this practice, as they could not offer the huge diversity of products that the market now demands unless they did so, and only the real afficianados and cognoscenti are ever likely to know that the same underpinnings can be found in, say, a £50,000 Audi TT RS and a £14,000 Seat Leon. General Motors have developed a whole series of “platforms”, most of the current ones of which are referred to by letters of the Greek alphabet. Lambda is the one used to underpin their latest Crossover vehicles in the US, and there have been four manifestations so far: Buick Enclave, GMC Acadia, Saturn Outlook and Chevrolet Traverse. Line all four of these vehicles up, and it would be hard not to dig out the term “badge engineering” again, for this quartet do all look remarkably similar, and are all aimed at the same sort of market – the family who needs a large practical vehicle for carrying up to 8 people and all their stuff.

Earlier this year I had my first experience of Lambda, with a test in New Mexico of the now obsolete Saturn Outlook, and I was generally rather impressed. I ended the test report with a postulation that I was likely to get the chance to sample more members of the quartet as the Hertz fleet seemed replete with the Chevrolet Traverse, and, sure enough, this prognosis came true when I arrived in Phoenix on a Sunday evening to find a rather empty looking rental facility. The test car was a 2011 model, but it has changed only in minor detail from 2010, and even from the launch cars of the year before that. Three trim levels are available: LS, LT and LTZ, and my vehicle was the middle one, and it came with the optional All Wheel Drive system, though the only way you would know was from the badge on the back (unless you looked underneath, of course!).

Mechanically, the Traverse is identical to the Saturn Outlook, so I expected it to offer the same driving experience, and it did. The Traverse comes with a 3.6 litre V6 engine, which develops 281 bhp. It is coupled to a smooth operating six speed automatic transmission. The engine does its job, providing good levels of acceleration, with a surprisingly throaty roar when you put your foot down hard. It is quite a torquey unit, so you can drive it relatively gently for a more serene driving experience which probably suits the nature of the car. The average fuel consumption for the test mileage was 21.4 mpg US, which works out at 25.6 mpg Imperial. Considering this is a large and heavy car, I suppose this is not too bad. The trip computer advised that since it was reset – which could well have been from new – the average was a rather scary 14.8 mpg. It did also say that the average speed was only 21 mph, so I suspect the Chevrolet had spent most of its 5000 miles in heavy traffic somewhere, as I averaged a lot more than that during my tenure.  Crossover vehicles like the Traverse are not going to be sought after for being the last word in the “fun to drive” experience, but one of the rasions d’etre for this genre over the overt SUV and the MiniVan is that they are that bit more car like to drive. Certainly, the Chevrolet did not scare me on the bends like the outgoing Ford Explorer does, and with well weighted steering with decent feel to it, and safe feeling handling, I was perfectly happy taking the swooping roads that connect freeways with a modicum of speed. Unlike the Saturn, I had no complaints about the brakes on this car, which seemed to do the job as they are supposed. There is a foot operated pedal for the parking brake, as you might expect in a car of this type. The Traverse rides well, and it is quite refined at speed, so it is a comfortable cruiser for those long journeys.

The Traverse is a big vehicle, and although it is easy to drive, seeing out of it, and positioning it can be another matter. One feature I did like was that the door mirrors had an insert which provided an extended field of view, almost completely eliminating the blind spot. Although this would add to the cost of the mirrors, I think that money is better spent on this than in the current craze for putting indicator repeaters in the mirror casing. Sadly, this did not help when reversing it. The upswept rearmost side windows, combined with the distance away from the driver meant that reversing out of parking spaces was more than a little challenging, with a significant area that you could not see at all. Reversing in a straight line was easier, as there is a good view out of the back window.

Although the first impression is that the dashboard of the Traverse looks completely different to that in the Outlook, if you look more closely, you can see how the same basic components have been shared, but the details make it look different. In the Traverse, the instruments are split so that the rev counter and water temperature are grouped to the left, with an ovoid shaped chrome ring around them, the speedo and ammeter similarly to the right, and the fuel gauge is in the middle. All are clear and easy to read. Above the fuel gauge is the digital display for the odometer and the various trip computer settings, still presented in the sort of green graphics that you would have found on a PC monitor in about 1986. Centre of the dash contains a standard GM audio unit, which had an XM/Satellite capability (but the subscription had expired), and below this are the controls for the climate control. A single column stalk, slightly too short just as in the Saturn, on the left of the wheel does lights and wipers as well as the indicators. The wheel contains buttons for remote operation of the audio system, and the cruise control. Compared to GM dashboards of even only a couple of years ago, this is so much nicer to look, and made of much better quality plastics than used to be the case. Sadly, Chevrolet are still not quite there, as when you looked at how the dash moulding was designed to flow onto the door casings, it appeared that the alignment went awry in the manufacturing process, with an uneven gap and the different trim textures not quite lining up properly.

People who choose the Traverse probably care less about the last detail in interior quality than they do about interior capability, and here the big Chevrolet scores very highly. Make no mistake, this is a big vehicle, but it is also an extremely commodious one. There are three rows of seats, and you really could carry 8 people in it, and even take some luggage as well. Whilst the boot is not massive when the rear most row of seats are in place, you could pile up a row of suitcases, and take advantage of the relatively low floor and the Traverse’s height. There is even a small underfloor stowage area for loose little items, as well. The rearmost seats are split asymmetrically, and fold down by pulling a lever on their rearmost face, dropping down flush with the boot area, even tucking the headrests out of the way in the process. Configured to seat 5, you could put a vast amount of luggage in this car. The middle row of seats are also split asymmetrically. They are on a slide, so can be positioned well forward to provide more leg room for those sitting in the back row, should this be needed. These seats can either be folded down so that they are flush with the area behind, creating a very long load area indeed, or there is a pull strap on the side of the seat which pulls up the seat cushion, drops the backrest onto the cushion and tilts the whole seat forward to the almost vertical.  Inside the cabin, there are plenty of places for odds and ends: a glove box, door pockets, moulded to carry a bottle in them, a central armrest which has a slide on it so it can be right between the seats or almost behind them (and on which controls for the climate control and audio take up point for the rear passengers can be found), and an immensely deep cubby between the seats, along with a much smaller area in front of the gear lever, and a surprisingly deep lidded bin on the top of the dashboard.

Even the base LS versions of the Traverse come well equipped, with features such as climate control, On-Star, satellite radio, and roof rails included as standard. The LT trim adds alloy wheels on 255/55 18″ tyres, a leather wrapped steering wheel (which could do with being a bit chunkier), heated door mirrors with indicator repeaters in them, 8-way power operated seats, a blind spot alert system, and the trip computer. The LTZ has a slightly more powerful engine, leather seats, captain’s chairs for the second row, tri-zone climate control, a rear-view camera, a Bose sound system, power-operated tailgate and 20″ wheels. The All Wheel Drive option costs $2000 and is available on all models. Retail price for the test car was $33,745, which is a lot of car for the money.

For what it is, I liked the Traverse. Although I could not imagine myself owning one, that is because I simply do not need a car of this type at all. But, for those who do, who need to carry more than 5 people, or 5 people and lots of luggage on a regular basis or over long distances, this would be an excellent choice. It’s not the automatic selection in this sector, though, as I was also very impressed by the Mazda CX-9, which has plenty to recommend it, and there is one more – slightly more car-like to look at – opponent that I am still eager to try: the Ford Flex. People looking for this sort of vehicle have genuinely never had it so good. 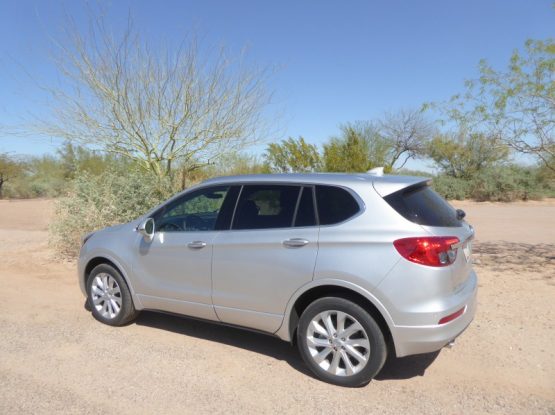 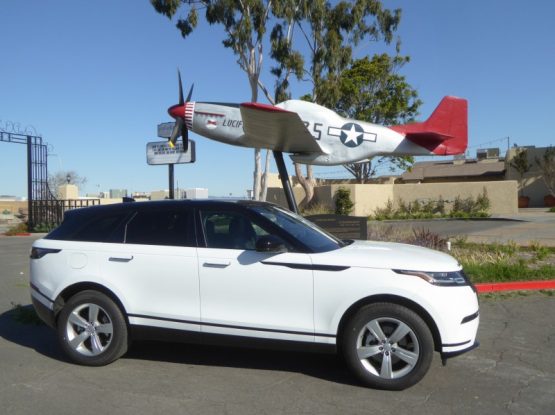 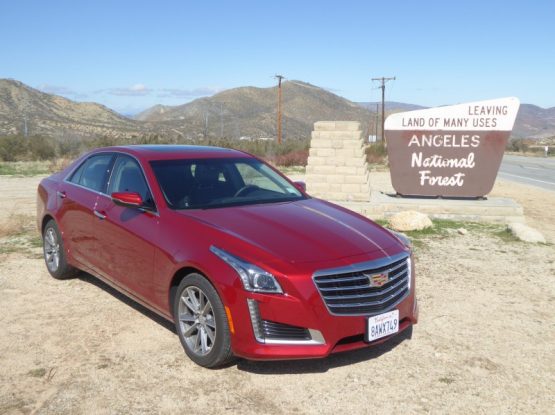