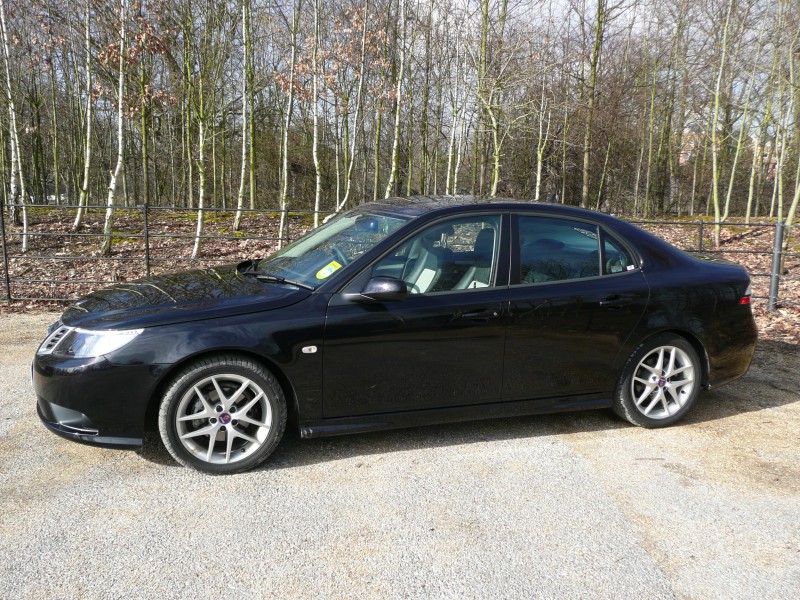 Many marques have hit the headlines in the past few weeks, with big questions raised about their future viability. In some cases, there is genuine angst that a well-loved range of cars and a strong heritage is at the risk of dying completely, whereas for some others, there is a more general indifference as to the brand’s ultimate fate. SAAB is definitely one of those on the endangered list, and the fact that GM is desperately trying to offload their Swedish Problem Child has been well documented for several months now. As to whether one should care, or whether it is just “one of those things”, that probably depends on whom you ask. Twenty years ago – before the GM acquisition – this was definitely a strong brand, well respected and admired for producing slightly quirky cars that were strong, safe, durable, practical, and when fitted with the turbo engine, surprisingly rapid, yet all so very “sensible”. Years of under-investment by GM has left SAAB with a range of 2 basic models, both of which are among the older model types of any on sale, in that difficult market area of “not quite premium”, but certainly aspiring to be a cut above the average fleet fodder of the mass brands such as Ford, Vauxhall, Peugeot and Renault. Testing times for SAAB, then, and perfect timing to see how the current product fares in 2009. Hertz helped me achieve this by offering me a 9.3 as my latest rental car.

The test car was badged 1.8t Vector Sport, and was fitted with the 150 bhp turbo engine, and the optional 5 speed SAAB Sentronic transmission.  Along with optional jet black metallic paint, this all took the list price of the car to £25,410, which struck me as lot. Getting into the 9.3 for the first time, I noted that although this car is largely a Vectra underneath, a couple of the traditional SAAB idiosyncracies remain: the little knob on the air vents, and the ignition “key” which has to be put into a slot in the centre console. This last is not now so unusual, of course, and the fact that the test car was an automatic meant that it was not necessary, or even possible, to leave the car in reverse before the key could be removed, as always used to be the case with SAABs of yore.

Time to set off, and almost immediately, l started to wonder about the “Sport” badging. The wondering did not stop for the duration of the test. First impression was that the steering is light, quickly followed by the discovery that it is also somewhat vague. So light and vague, that I wondered if the wheel was connected by cooked spaghetti. Definitely one of the worst features of the car, and one which meant that it really was no fun to drive around any sort of a bend, even the ones that lead to and from my house from the main road! Next thought – and this was one dawned on me even in urban traffic – was to wonder which of the 2 states of engine tune was under the bonnet. SAAB’s 1.8t engine can be delivered in both 120 and 150 bhp form. Judging by the lack of any real urge under the bonnet, I rather assumed that I was driving the lesser model. There does not appear to be any way of telling by looking at the car itself, even under the bonnet, so it was only when I got the final paperwork on returning the car, which states the list price, that I could be sure that it was in fact the more powerful of the two that I had been driving. The Vector Sport is not a fast car, and it is also cursed – or at least this one was – with a slightly stiff feel to the accelerator pedal, so you had to press surprisingly hard to get any initial momentum at all. That said, the engine is smooth, and there was no trace of turbo lag. Some of the problems, perhaps, are down to the SAAB Sentronic automatic gearbox, a very smooth 5 speed auto that changes almost imperceptibly between the gears.  Given the relative lack of urgent acceleration, it is probably not a surprise that there is no trace of the dreaded torque steer that a few years ago was practically a sine qua non with fast SAABs (OK, this is not a fast SAAB!). According to the trip computer, and corroborated by the amount of fuel I needed to replenish the tank, I averaged 29.1 mpg, over my test distance, much of which was done at a steady speed on the motorway. Whilst covering those motorway miles, the noise level from the engine was pleasantly subdued, but I could not help noticing rather more tyre noise than I would expect on a car of this class. More irksome, I also noticed irritating reflections of the speakers from the back parcel shelf in the rear window, and some reflections in the screen as well. Other than this, visibility was good, and the fitted parking sensors – although somewhat eager to alert to surrounding obstacles – were definitely welcome when trying to cram the car in a small space opposite my abode. I made no other observations – good or bad – about the other dynamic qualities of the car. Interpret that as you will.

Another long-standing SAAB tradition was that of peerless ergonomics, generally delivered in an unfussy way. Here too, with the 9.3 there is some disappointment. Yes, the range of adjustments available to the steering column and seat meant that it was easy to get a comfortable driving position, and then one is greeted with a very clearly laid out dash, with every switch and function both very accessible and intuitive, until it comes to the handbrake. A centrally mounted lever, the release button is mounted underneath it, to that when the lever is pulled on, it can fit flush with a moulding in the centre console. Any aesthetic gains of this arrangement are more than negated by the fact that it makes the handbrake awkward to use. One feature beloved of the SAAB traditionalists is the “instruments only” lighting available at night, though as most of the test was conducted in the daylight, I was not able to try this feature out.  One design feature I did not like was the tactile feeling at the end of the column stalks, which was decidedly rough, and not nice to the touch. I was also a little frustrated that there was no apparent indication of which gear was selected – assuming it was a forward one, the indicator simply said “D”, regardless.

Like most of its potential rivals, there is ample space, and no more, in the cabin. With the front seat adjusted to suit my short legs and tall body, there is decent space for rear seat passengers, but it would never be classed as overly generous. The seats themselves are comfortable, as you might expect. Similarly, the boot, which is a nice regular rectangular shape, but seemed notably smaller than the previous model Audi A4, for instance. The rear seat backs do fold forward, to extend the load area considerably. They are asymmetrically split, and the release levers for each side are located just under the upper lip of the boot lid where they are easy to reach. I did note that there is a warning message on the dash if you fail to lock the seat back properly in place.

Overall, I have to say that I was disappointed with this car. I know it is a relatively old design, and it has not fared too well in any recent comparison tests. Even so, I expected it to be better than proved to be the case. I was looking for some individuality, but I found none. What I found was a perfectly ordinary sort of car, with plenty of niggles, and no overwhelmingly good features to persuade me to overlook them. I found a car badged “Sport” that clearly is not even remotely sporting, and I found a car that at over £25,000 as tested is probably overpriced by about £4000. The SAAB 9.3 does not get close to the standards of the slightly more expensive German triumvirate, and it is questionable whether it even hits the standards of the much cheaper non-premium badged mid-sized cars. In the case of the Mondeo, and doubtless the Insignia, I am sure it does not. If GM achieve their desires and cut SAAB loose, it’s going to take more than a minor miracle – and certainly a new product – to save them. What a shame. 2009-11-19 19:40:24