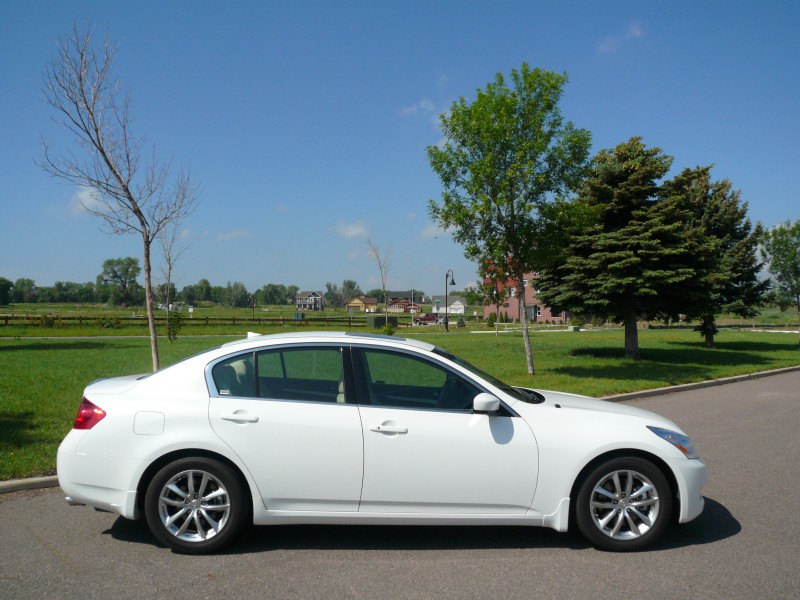 “Consumer Reports” regularly publishes a comprehensive review of all vehicles on sale in America. Their assessments are based not just on their own testing, but feedback from owners, once there is a significant enough sample size to include this data. Each car is rated on a scale of 1 – 100. The majority of vehicles rate somewhere between 50 and 75, with a few lame ducks (such as the Chevy Aveo, Chrysler Sebring and Jeep Liberty) scoring a lot less than that. A very few score much higher, and it is fair to assume that these cars are generally going to be both good to drive and good to own. My latest test car is rated at 95, which is the highest rating bar one, so that should make it exceptional. It’s not just “Consumer Reports” that think that the mid-sized Infiniti sedan is good: all the rest of the American press have consistently rated this car very highly ever since the introduction of the previous model several years ago. Indeed, I tested a first generation G35 and thought it was stunningly good, so when I read that the new car is even better and really is the equal of, or even better than the much lauded 3 Series, you have to expect a pretty impressive ride

The latest G Sedan was launched a couple of years ago, and it was almost impossible visually to tell the difference from the old car, as the styling was so similar. About the only really obvious clue is the chrome strip across the leading edge of the boot lid. Look closer, and every single panel is different and so are many of the details, but the overall effect is very much the same, avoiding the temptation to overstylise, which seems to have afflicted the latest FX35 models. To be honest, I do prefer the older model, but the latest car looks very smart, too, lacking the sort of fussiness that afflicts some of its competitors, and the plain ugliness that bedevils the latest Acura cars.

For the 2009 model year, Infiniti dropped the 3.7 litre petrol engine into the Sedan that had been fitted from launch to the latest G37 Coupe, thereby creating a new model identity, the G37. The car is available with either rear or four wheel drive, and a variety of trim options, though even the entry level model is far from sparsely equipped. As before with the 3.5, this 3.7 engine is a close relative of the unit fit in the Nissan Z sports car, so now the new 370Z. In this installation, it develops 328 bhp, which is plenty indeed for a car of this size, and even allowing for its less than light weight, is enough to give outstanding levels of performance. One consequence of the change of engine is that it is now quieter and more refined. With the old model, when you fired it up, it sounded just like a 350Z, and every time you blipped the throttle, you really knew you had something special under the bonnet. Not any more, as the G37 idles quietly and goes about its business in a pretty subdued manner unless you really rev it hard, when the department of sound does indeed wake up. The department of action does, too, and this car will rocket forward in a way that really surprised me initially. What a shame that even on the open roads of Colorado, you really cannot do full justice to this car, as the forces of law and order never seem to be far away. The engine is fabulously smooth, yet it will rev all the way to the red-line, without losing any of that refinement. Truly one of the most impressive engines around at present, for sure. The test car came with the standard 7 speed automatic gearbox. Actually, you would never know how many speeds are in there, as you simply cannot tell when it changes gear, it is so smooth. There is a sport setting, which then allows you to make manual selections by tapping the lever back and forth, but there is no way that I can make changes as smoothly as the car’s electronic brain. A 6 speed manual is available, but only on the Sport model. Playing with even some of this power does entail a certain cost at the pumps, though. I have averaged about 26 mpg (US), which is satisfactory, but far from outstanding. You can’t have everything, I suppose.

What you can have, though, are a set of excellent dynamics. This car has, deservedly, been widely praised for its steering and handling, and I could find nothing to fault. The steering is perfectly weighted, and has just the right amount of feel so you know exactly where the steered wheels are going. No qualms about the handling either, which is simply excellent. The same can be said for the brakes. And the ride. The G37 is also supremely comfortable. I drove it from Denver to Grand Junction, a distance of around 250 miles, without stopping, up through the Rocky Mountains on the I-70 freeway, and could easily have carried on a lot further had there been a need.

Inside the cabin, and the good news continues. If any car can rival Audi for the quality and ambience of its interiors, it must be Infiniti. The G37 has a beautifully built interior, constructed from a mix of high quality plastics, just the right amount of metal effect trim to provide some visual and textural variety to the dash, and some sumptuous leather seats. The Infiniti logo features on the seat backrests, and these just complement the design perfectly. My only qualm is the steering wheel, which does not feel or look like it is leather trimmed, although apparently it is. The main instrument binnacle and steering column adjust as one, so when you move the column up and down, in or out, the binnacle maintains the same relationship, which was actually a pity, as I would have preferred to have the relationship slightly different from that provided by Infiniti, but this was a minor point. The dials themselves are crystal clear, and look particularly impressive when lit up, with a blue ring around the rev counter and speedometer. The column stalks looks after the lights and wipers, and they are very quality-feeling items, which are nice to operate. There is an integrated display unit in the centre of the dash for the stereo system, showing the climate control settings and with an “Info” button for other information. It is much easier to use than any of the systems you find in the G37’s German competitors, and it looks good as well, with very crisp screen graphics. The gearlever, with aluminium inlay, is the main item in the centre console itself, with twin cupholders and a not especially deep cubby hole located behind it. In front of the passenger, there is a decent sized glove box, and there are good door bins for those odds and ends that accumulate. Like many of the latest designs, there is a “start” button, which is located to the right of the column, and works provided you have your foot on the footbrake. There is a slot for the very high quality “key” on the lower left part of the dash, just as I found with the FX35 I tested recently. One other nice touch is that not only are the seats electrically adjustable, but the motors power them rearwards when you turn the engine off, to give you more space to get in and out of the car. Once the key is in its slot, they power back to their last setting. There is a memory setting allowing for two different driving positions to be stored. A nice touch, for sure. A large glass sun roof makes the cabin feel airy and light.

There is ample, but not overly generous room in the rear seats, and just like the 3 Series, C Class or A4, although there is more space than used to be provided, this would probably be more pleasant for 2 than for 3 passengers, especially as there is the not insignificant issue of the transmission tunnel with which to contend.

About the only significant weakness I could find with the G37 is that the boot is surprisingly small. It is also quite difficult to access, as the opening slot is quite narrow between the rear lights, and the boot lid does not lift that high out of the way. There are some small storage areas under the main boot floor, surrounding the space saver spare wheel.

I handed back the G37 with more than a little regret. As an alternative to the dreaded Ford Explorer which Hertz initially allocated to me, I really feel I got a massively better car. Indeed, my biggest concern is that whatever they give me at my next destination on this holiday is bound to disappoint. Truly, the G37 is worth that rating of 95 out of 100. It is both an accomplished car and one that I think you would be proud to own. Without a diesel engine, though, when the car goes on sale in the UK later in 2009, I suspect it will sell in very low volume, and that will be a pity. For all those who want an alternative to the BMW 335i, this really is the car to go and try. And buy.