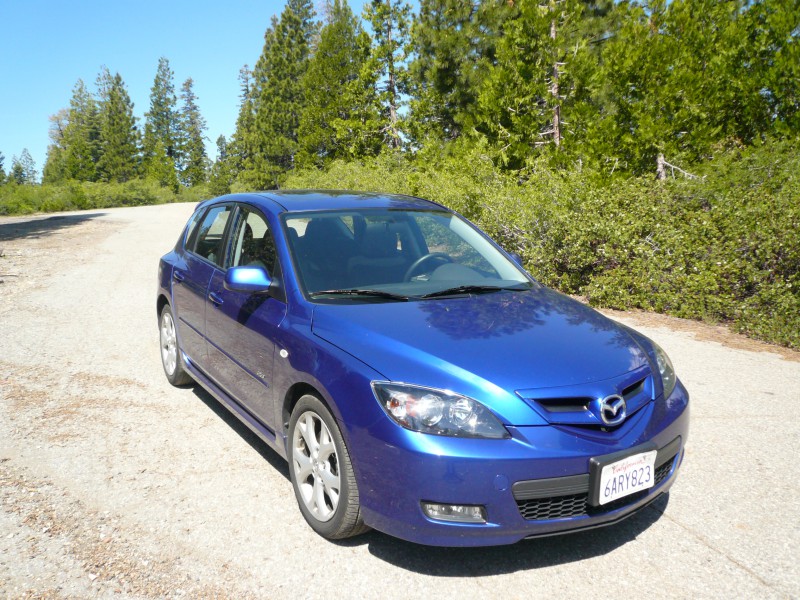 Earlier this year, I spent a few days whizzing around Los Angeles in a bright red Mazda 3 Sedan, and my conclusions were generally pretty positive. I did, however, complain about the lack of a fifth gear and hence the consequent noise at cruising speed. That car was a 2.0 sedan, which comes with a 4 speed automatic transmission. I’ve just spend a few days in a 5 door hatchback, fitted with the larger 2.3 litre engine, and a five speed automatic transmission.

Unlike in Europe, where the 4 door saloon version is generally marketed as the more up-market of the variants, in the US, Mazda market the 5 door hatchback as something “superior” to the regular sedan, so this model is only available with the larger engine, and the higher trim levels. I was certainly glad of the sun-roof, as this gave an extra orifice through which to try to dissipate the over-powering smell of cleaner which was so bad I nearly took the car back. I did not, though, so can now present a verdict on this version of the small Mazda. Time to reassess, then.

The 2.0 model did not lack urge, for such a small car, and so it will come as no surprise to learn that the 2.3 does not, either. It would take a back to back comparison drive to be sure just exactly what effect the extra power – all 8 bhp of it – actually brings. The extra gear does make all the difference, though. Instead of being a noisy car, this is now pleasantly quiet to cruise at freeway speeds. There is a manual shift mode, selected by sliding the lever over to the left from the “Drive” position, when you can then change down a gear by pushing forwards and up by pulling backwards. Unusually, the gear selector indicator in the bottom of the speedo actually showed which gear you were really in when in “Drive”. There was never any real doubt when the car changed down, as the revs went up and so did the noise, but the change itself was smooth. In a mix of stop/start and long freeway drives, I averaged around 30 mpg (US), which is not brilliant compared to what I had seen in the Infiniti that I had been driving before. What is brilliant is the way the thing steers and handles. Although not quite up to Euro-spec Focus standards, the Mazda is easily one of the best US market cars to drive in this respect, and this is doubtless one of the reasons why it rates so well with the American press. The steering is light, but has plenty of feel to it, and the handling really is very secure, allowing you to tackle swooping bends with confidence at speeds I would not have dreamed of, in say the Aspen that featured recently. Not only that but the Mazda 3 rides well, and it was challenged by a variety of rough and bumpy freeways, as seem to be found all over California. No issues with the brakes, which proved light and effective. There is a central pull up lever handbrake between the seats, which I only used occasionally, as this was an automatic car.

On one long day, I covered almost exactly 500 miles, on the drive from Sacramento to Yosemite, around the Park, and back. As I set off, I did wonder if I had made a mistake and should not perhaps have sought a bigger car, but I returned to the hotel none the worse for the experience. That means that the seat comfort gets top marks, for sure, and also vindicates the noise levels, as a good part of that journey was on the I-5 and I-99 freeways. Although a bigger car would have been a little bit more restful, I had the feeling that when it came to the twisty non-freeway roads approaching and in the Park, the Mazda would more than hold its own, and I think my hypothesis proved correct. If only this had been the Mazdaspeed MPS version…….

Inside the cabin, and this car was just like the red one I drove earlier in the year. The dash comprises three ringed dials within the main binnacle, which light up with red markings once the key is turned. They are clear and easy to read. Simple controls in the centre of the console operate the stereo system and the air conditioning. Climate control is not fitted, but the system in the 3 coped well with some temperatures that rocketed into the 90s. Column stalks do indicators, wipers and lights. Everything felt very solid and of a decent quality, though lacking that final touch of sophistication that had been in the Infiniti I had handed back immediately before this test. The dash itself is made of decent quality plastic, and has a dark silver inlay, which adds some visual relief, without looking tacky, and there is a very subtle red fleck pattern in the seats and the door trim, which lifts the interior that bit. There are plenty of oddment stowage spaces, as you would hope for in a practical car, with a large glove box, door bins and twin cup holders between the front seats.

The other significant difference from the sedan model is clearly the provision of a hatchback. Opened by a touch pad under the very bottom edge of the rear door, and surprisingly not by any remote lever from inside the car, the hatch then lifts well clear to leave a regularly shaped, but average sized boot. There are small compartments under the floor area for odds and ends. The rear seats are split asymmetrically, and are simply folded down onto the rear seat squabs, to create a much larger load area. Another consequence of the hatch end to the Mazda is that there is no protruding boot area, so when you look behind you, it is easy to judge where the back of the car finishes. Ample sized side windows behind the rear doors also help with over the shoulder visibility, making it very easy to position, and park the Mazda, as well as judging where traffic is coming up behind you as you join the freeway.

Netting all this out, there is only really praise here. The larger engine and fifth speed really did make all the difference to the Mazda 3, alleviating my most serious criticism from before. That leads me to say, as indeed I did, when Mr Hertz asked me, that this is indeed a good car. In fact, I would go one stage further. 30 years ago, Mazda launched an early version of this car, called the 323 or Familia in other markets, but they sold it as the “GLC ” in America, which stood for “Great Little Car”. I strongly suspect that it was not that Great. But this one really is. In the American market, deprived of excellent mid-sized hatches like the Euro Focus and the Kia Ceed, the Mazda really would seem to be the best bet in its class.