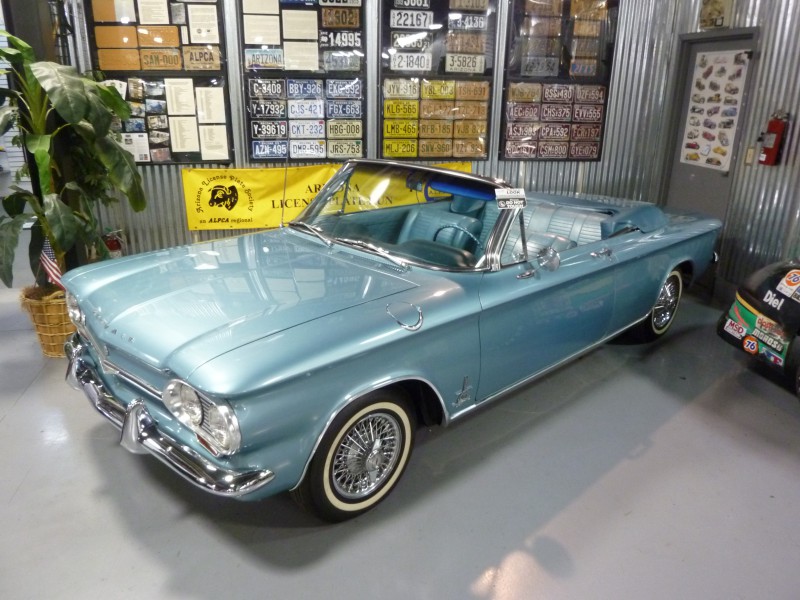 There are a lot of historic and classic cars right across America, but it may surprise you to learn that the State that has the largest number of them is not California, or even Florida, but the less populated State of Arizona. Clearly its very dry climate helps, but I had never quite figured out that one reason why the globally renowned Barrett Jackson auction house,  as well as half a dozen others who arrange the sale of some very costly and globally significant or unique cars every year are all located in Scottsdale, an affluent district in the Phoenix area is linked to the fact that at least some of the client base are local. Given that, it has always surprised me that unlike the Los Angeles area where there are a significant number of car museums, there seemed only to be the Penske Racing museum in the whole of Arizona, with all those cars being stored away in private collections, invisible to the general public apart from any time when their owners happen to make any sorties out on the roads. However, as evidence that it is worth continually checking, just in case you have missed something, or things have changed, when I did a quick Google in advance of my September 2013 visit, it would seem that the area now boasts not one, but two fully fledged museums. Both are within a couple of miles of each other, just off the I17 freeway on the north side of the city. I managed to fit in a visit to the Scottsdale International Auto Museum on my trip. First opened a couple of years, it was initially located in Scottsdale, but it no longer is. Despite the name, it is now to be found in a shopping centre. It’s not obvious where it is, and there are no signs to guide you, so having driven up and down Metro Parkway, I had almost given up trying to find it, as the address did not seem to match up with what I found on the ground, so I decided to pay a visit into the shopping centre itself, to see if there was anyone I could ask, when lo, I found it. Currently the museum is in a temporary location in a former store, but work is underway to convert a much larger unit, one of the corner locations of a former anchor store into a much larger display area. That will allow the museum to show far more of the 250 or so vehicles in the collection. A small selection are all that space permits at present, but they have been carefully selected for the interest or stories attached to each. The museum operates on a not for profit basis, so entry is currently a donation of $5 which goes to charity. Having paid this, Jim, the curator who was on duty at the time then gave me a personally guided tour, taking as long as it took, to tell me something about every single car on show.

First car I came across was a 1956 Jaguar D Type. And yes, before you ask, it is a genuine one, not some replica, and it has recently been authenticated by a number of Jaguar specialists from the UK. Jim told me that when the museum moved from Scottsdale, he got the chance to drive this car, and once you have squeezed into the cockpit (and his build is not dissimilar to mine, so he is not a large guy) it is surprisingly easy to drive, unlike some of the other exhibits which proved either difficult or unpleasant from behind the wheel!

Pride of place in the collection goes to this, the Howard Hughes car. A one-off, based on a 1936 V12 Lincoln, this car was created by America’s 1930s industrialist, who not long after he bought it, started an extensive series of modifications to create something unique. The styling makes the car look like a cross between a car and a boat, and Hughes used the then new aluminium to fashion not just the distinctive body, but he also took a solid block of the material to cast a new cylinder head, with the result that he created an engine that was 250 lbs lighter than the original as well as putting out an extra 50 bhp, making the car capable of over 100 mph. The car was found in his estate when he died and has been cleaned up to its current condition.

This 1963 Chevrolet Corvair Spyder is not only completely original, but also pretty much how it came out of the factory. Spyder cars are relatively rare, and despite the bashing that the Corvair got from sensationalist Ralph Nader, were actually quite good to drive (once the early cars had the suspension modified).

1963 saw the launch of the Corvette Stingray and for the first year, cars had a split rear window, which makes them particularly collectible. This is one such, whose first owner was Barry Goldwater, an Arizona resident and (failed) Presidential candidate.

This 1941 Packard 180 Limousine, one of just 120 that were produced, was the property of Franklin D Roosevelt, and was found in a somewhat forlorn state in a barn on his estate when he died many years later. There are numerous unique features on the car which was made to his very specific requirements.

This 1957 Ford Thunderbird is one of just 18 that were painted in this distinctive Dusty Rose colour. Thunderbirds were expensive – costing around $4000 – which made them far more costly than the Chevrolet Corvette, which is one reason why sales of the early cars were low.

One of the most splendid cars on show was this 1957 Buick Roadmaster Convertible. This car was ordered new by Jerry Lee Lewis, and with a lot of options on it, including an all leather interior, would have cost a lot more than a comparable Cadillac of the era.  Buick were so confident of the comfort levels of the seats that they offered a guarantee to prospects that if they did not find them more comfortable than their domestic sofa, they would pay them $20. Jim very kindly invited me to test it out myself. The seat was very soft, much like that you would have found in a Citroen DS, and it did indeed feel like it then moulded itself around my body. If only the invitation had extended to taking the car out on the road…..

This is a 1964 Chevrolet Impala 409 Convertible SS. Beautifully restored, it has won multiple awards in recent years.

Excalibur is a well known company who made pastiche replicas of 1930s Mercedes SS models. This one was made in 1978, and has a GM 6.8 litre V8 under the bonnet. These cars were costly when new, priced around $70k.

The Ferrari 412i was never sold in the US, I was surprised to learn, so the owner of this car likes it as it tends to puzzle a lot of Ferrari enthusiasts who apparently do not know what it is. It had the regulation side reflectors added to the front and back wings which do not really do it any favours, but otherwise, I still think that these are elegant machines, still undervalued in the market.

A 1929 Chevrolet, this is one of the last such models made with wooden wheels.

This 1911 Thomas is one of half a dozen vehicles that were made by Disney Corporation in the 1950s from a collection of parts from all sorts of cars of the period, and was used at their Studios until the 1970s. It featured all sorts of strange things including a wooden bulkhead, a mascot on top of the grille that had come from an ornate water tap (!), and plenty of bits of Model T. The other were destroyed so this is the only survivor.

First owner of this 2002 Hummer H1 was John Travolta. He was among a number of celebrities (Arnold Schwarzenegger being another one) who bought these when they came out, and spent a lot of money on then customising them. A massive vehicle, even by American standards, demand for something a little more manageable led to GM deciding to make a range of slightly less massive Hummers, the H2 and the H3.

This Gothic Coach was made for the Harry Potter films.

Another movie vehicle was this, the Ice Princess.

This 1988 Chevy Lumina  was driven by Tom Cruise in the 1990 movie Days of Thunder which featured the Daytona 500 race and which did much to popularise NASCAR.

Only 6 Daytona Cobras were made, and this is not one of them, but a much later replica that still looks stunning.

This was a fascinating collection, and really brought to life by the lengthy expositions I got from Jim. We must have spent an hour chatting after the tour, too. The enlarged premises, which are on the same corner of the Metro Centre as the current unit should be finished by January, so I will most definitely be including a visit to that on my next trip to Phoenix. If you are in the area, you should go too and see some fabulous cars. You probably won’t get a personally guided tour if the number of visitors increases, as it surely will, and the entry cost will go up to $10, but it will still provide an interesting and worthwhile trip out.

More details can be found at the museum’s own website:  http://www.scottsdaleinternationalautomuseum.com/ 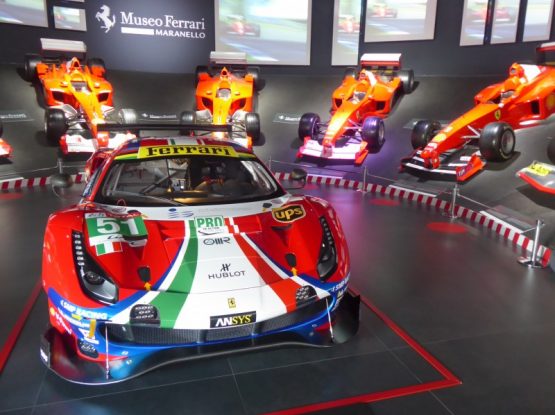 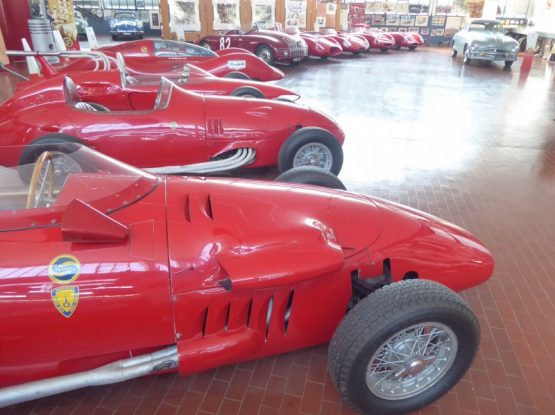 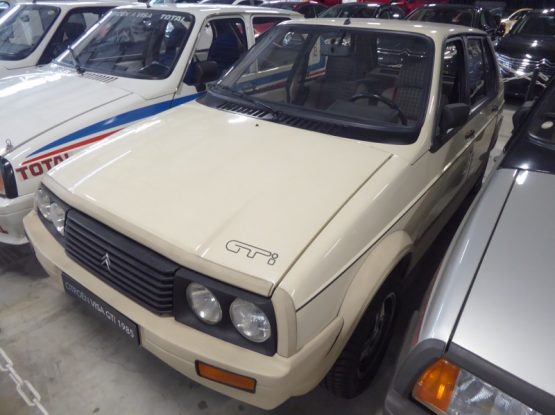