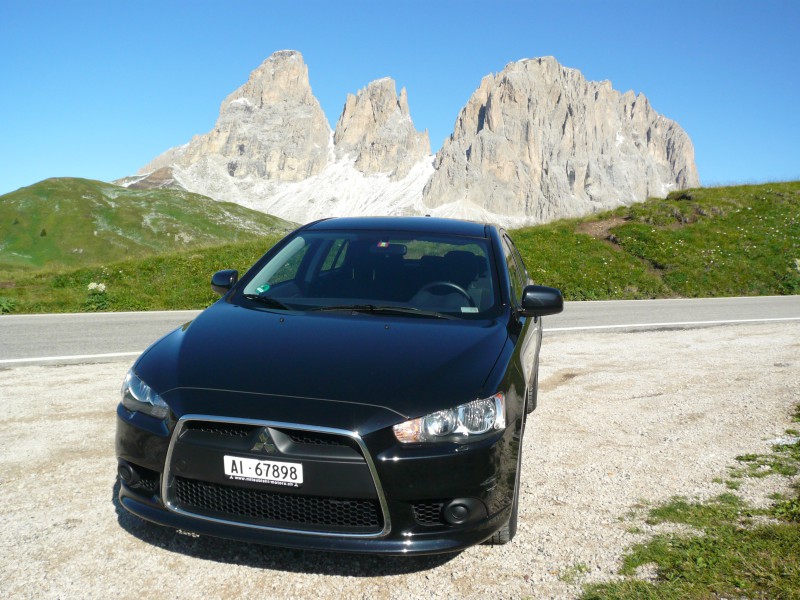 With the exception of the Evo, Mitsubishi is not often noted for making headline automotive news, or even probably very much in the public consciousness for its range of cars. Indeed, of all the still extant manufacturers, it must look rather more imperilled than most, as sales volumes are relatively small wherever their cars are sold. They do not seem to get much press coverage, either. None of this necessarily means that the product is at all bad, and my recent experience with the Colt hatchback suggested that Mitsubishi can build a perfectly decent, if slightly unremarkable super mini. When I ended up with a choice of precisely nothing else (thank you Sixt at Zurich Airport), I took the opportunity to see if the same conclusions will apply to their latest medium sized car, the Lancer.

The test car was a hatchback, or “Sportback” in Mitsubishi parlance, fitted with the 1.8 litre petrol engine developing 141 bhp and the standard five speed gearbox. Although based on the more familiar Lancer saloon (which is of course the essence of the Evo, before the mental engines and transmissions are installed), this car also took on the role of covering the gap in Mitsubishi’s range once filled by the oxymoronically named Carisma. A long drive from Zurich up over the Alps, taking in a couple of Passes, to Bolzano in the Dolomites, a 5 hour marathon on an unbelievably wet and traffic-infested Friday afternoon and evening, proved to be a good opportunity to reach a verdict. The rest of my time with the Lancer merely reinforced those initial impressions.

Let’s start with the looks. Slightly odd, I have to say. That huge square-jawed front end, that looks not inappropriate on an Evo does not really work so well on the Lancer, it has to be said. It certainly sits at odds with the rest of the car, which is really rather anonymous. When I first saw the Sportback, it really did look as if Mitsubishi had taken the established saloon and then drawn a line from the top of the roof to the leading edge of the bootlid and filled it in with a mixture of bodywork and metal. In reality, it is not quite like that, but it certainly would not get very far in any beauty contest, in my opinion. The rear window is actually quite large, but it has a huge spoiler across the top of it, and this combined with the not far from horizontal angle is what makes it look a bit strange. It does not do much for rearwards visibility, either.

Inside, things are definitely from the bland and inoffensive school of thought. There is a simple dash panel which goes straight across the car, with a titanium grey coloured inlay that lines the doors and the dash. It is also quite neatly presented, but with absolutely no memorable feature about it. The interior of my Amethyst Black metallic trimmed car was finished in mostly perfectly acceptable but unremarkable dark colour plastics and pretend cloth chequered trim. Without the accompanying photos, I am sure I would have forgotten already what it looked like. The dash comprises a dual cowled binnacle with a rev counter and speedo in it, separated by an area for digital displays of the odometer, and a bar chart fuel gauge. There is a button to the left of the binnacle to cycle through 2 trip meters, average fuel consumption and distance to empty displays. The stereo controls – apart from those mounted on the wheel – are in the very centre of the dash. The air con controls – some rather nasty and slightly stylised rotary switches are lower down below the fake titanium strip.

I struggled to get comfortable in the Lancer. The worst problem seemed to be the stepped adjuster to the seat backrest. Apart from the fact that it is very hard to reach around the base of the seat and seat belt, and all too easy mistakenly to get the similarly sized, shaped and adjacent height adjuster, I never seemed to be able to get the backrest where I wanted it. If the steering wheel had adjustment in and out, the problem might have been solved. As it was, the wheel came out too far, and I ended up sitting a tad too upright. Apart from that, there were no issues sitting on the seat for 5 uninterrupted hours, surprisingly.

141bhp in a medium-sized hatch should be ample to endow the Lancer with decent performance. There’s no denying that the engine is smooth, but it also feels desperately ordinary. It will rev, hard, if you really force it to, but it just seems so run-of the mill. It also sounds far from pleasant. There is a sort of slight metallic whine to it at most speeds, not unlike the noise that you used to encounter in many cars years ago. The challenges of both hills and traffic while going over the Fluela and Ofen Passes meant a lot of gearchanging, to get the momentum up. No hardship in using the ‘box, as the gearchange – operated by a leather-covered lever, is slick enough, though it “clicks” somewhat, especially when going from second to third gear. It never baulked, but it was ultimately not that satisfying to use, and use it a lot I did, as the relative lack of torque meant that there was a lot of second and third gear work. Despite this, the fuel economy would seem good, with only about a third of the tank consumed in 340km. At the end of the test, it averaged out at around 36 mpg, which is not bad considering the amount of mountain work that was involved. Although the Lancer is reasonably highly geared, it is not that quiet a cruiser. This seemed to be less of a problem of engine noise (that rather off-putting whiney sound excepted) than everything else. Road noise from the tyres on just about sort of road surface seemed to be the biggest culprit, but it did mean that the car was not particularly relaxing on such a long drive. In this respect, the A4 2.0 TDi Avant auto which was the only other car Sixt could offer would have been better, for sure. I did not take that, as I wanted a manual gearbox for the mountains. Knowing what I know now, that was perhaps a mistake. Not only was the weather so bad, that frankly, I should have cancelled the whole trip, but the Lancer is no real fun in the mountains either. There is a leather-covered steering wheel to hold, and it is connected to the wheels in such a way that there is precious little feel. As the roads were so wet, with sheer drops over the side, testing out the handling was perhaps not a good plan, but from I what I could deduce, this car is very different underneath from what you get with an Evo. It does ride quite well, and the brakes seemed to be OK. Mindful of the recent lecture I had about driving down Pikes Peak in bottom gear, I did no such thing here, and the Lancer coped well with the various tight turns of the Alpine Passes with no sign of fade or anything to worry me. There is a traditional pull-up handbrake between the seats.

The Lancer will be sold to most of its customers as a family car, and here it acquits itself quite well. There is ample space inside the cabin, with good leg room for rear seat passengers, better than you would find in a Focus, Golf or Astra. The boot is of a regular shape, and quite long from front to back, but it is not deep. That is partly because there is a removable false floor fitted, which means that there is no height difference in the boot from the top of the bumper/bottom of the tailgate. There is a bit of space underneath this, and then under the real boot floor you will find a space-saver spare and room to store a few odds and ends. The rear seats fold down to increase luggage space. In the cabin, a reasonable glove box is augmented by door bins, which have a moulding shaped to allow for the carriage of a bottle, and a couple of small cubbys in the centre console.

Like quite a few cars these days, there are no serious weaknesses with the Lancer, but the problem is, there are no obvious strengths, either. Quite why anyone would buy one, as an alternative to a whole raft of deeply impressive vehicles, such as the Focus, Golf, Octavia, Cee’d and so on, I really cannot imagine. It is significantly cheaper than the Ford, Vauxhall and VW, but not the Kia, so there is not even a USP there. Maybe people would want it because they could tell themselves that really this is just a tamer version of an Evo. I’ve not driven one of those, but from everything I’ve read, it is a good car. I now have to assume that it shares very little with the Lancer apart from some key body panels and some other non-essential bits under the skin. No, my conclusion has to be that with a car like this, Mitsubishi have found a car which may no longer be the antithesis of its name, but which is guaranteed to keep them as an “also ran” in the highly competitive volume car segment. 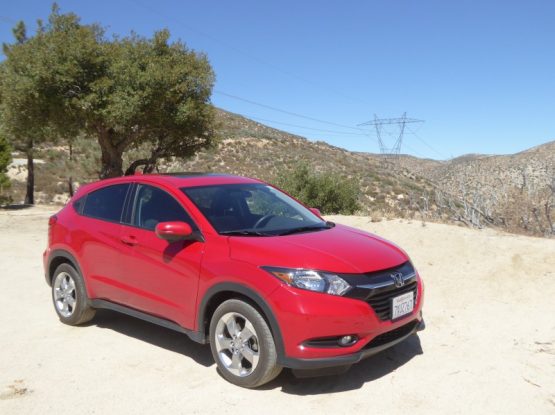 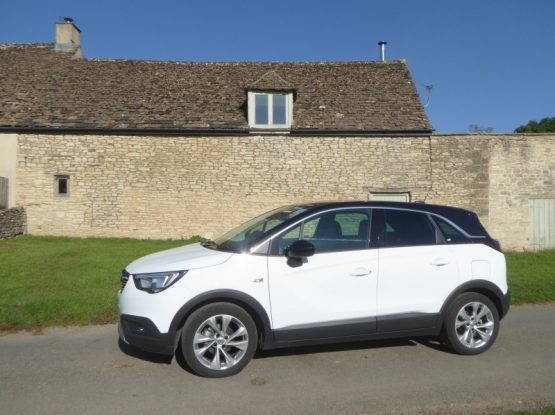 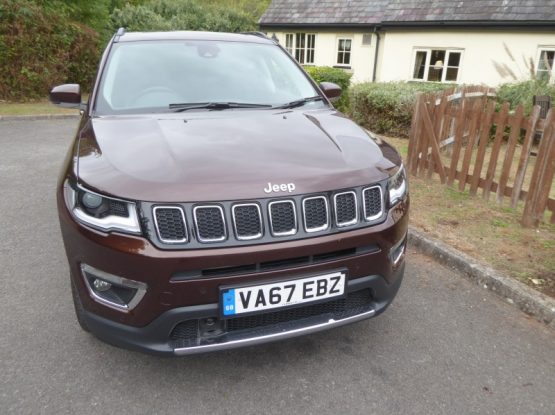